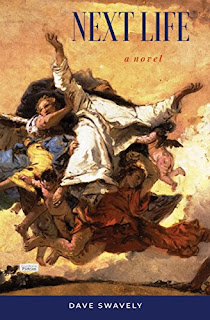 I am not sure what either the Apostle Paul or the Apostle John meant my being “caught up”, but I think their experience had a different focus than protagonist Pastor Tim Carler. I think the Bible describes the IS as being more about worshipping God while we wait for the Second Coming, than in being ministering spirits to the living. That aside, this truly was a very interesting read.

Unlike other fiction books that attempt to describe the intermediate state, the conversational style of the author interacted with scripture in competent ways. It was usually quite clear what was mere speculation and what had biblical support. Although I liked the biblical references that explained his understanding of what was happening, the net effect was to have a good story that kept getting interrupted with explanations.
I did like the way the book ended. In closing the book, Dave Swavely describes the evidence he finds for the events he participated in as a ministering Angel.  Particularly interesting and helpful was the backup data he found for Hitler’s decision to invade Germany.

As a book of fiction that gets us thinking about heaven, this is a worthwhile read.
Posted by Dana Perkins at 8:29 AM