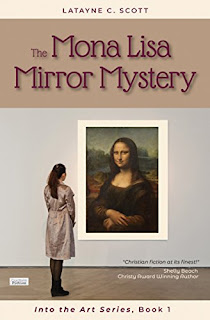 Here is a book that is short, clear, inexpensive, with substantial content and written for teens. Being only 78 pages, it can easily be read in two evenings. If you like the fantasy novels of Madeleine L’Engle or C.S. Lewis then you will probably like this book.

While I was not particularly drawn to the everyday conversation between the main character Addy and her teenage friends, I was drawn to the art history of the painting of the Mona Lisa as Addy was ‘whooshed’ back into time when she looked at the painting. Here is Art History told as a story, which made it more memorable then reading it in an Art History Book.

A side theme included an apt apologetic for the truth claims of the bible. When Michaela, one of Addy’s friends says the bible is “A book [that] can be true, have truth in it, without being real” we get treated to a developing dialogue between Addy and her dad and Addy and Michaela which eventually leads to the apologetic Lee Strobel uses to prove the historicity of Jesus Christ. Well done without being preachy.

While this book is a fantasy, the book also portrayed the reality of living in a broken world. One of Addy’s friends has weird behavior around an Uncle, which I think too predictably turns out to be because he is a sexual predator. This part of the story is written without details, but does reveal the value in telling parents when inappropriate behavior is taking place.

All in all, a good read, even for this 70 year old reviewer!